This site is reserved for the personal and private use of Internet users of legal age to purchase and consume alcohol, in countries and territories where the sale, advertising and consumption of alcoholic beverages are permitted by law. If you do not meet these conditions, you must immediately leave this site.
The Content is intended to be shared only with individuals of legal drinking age 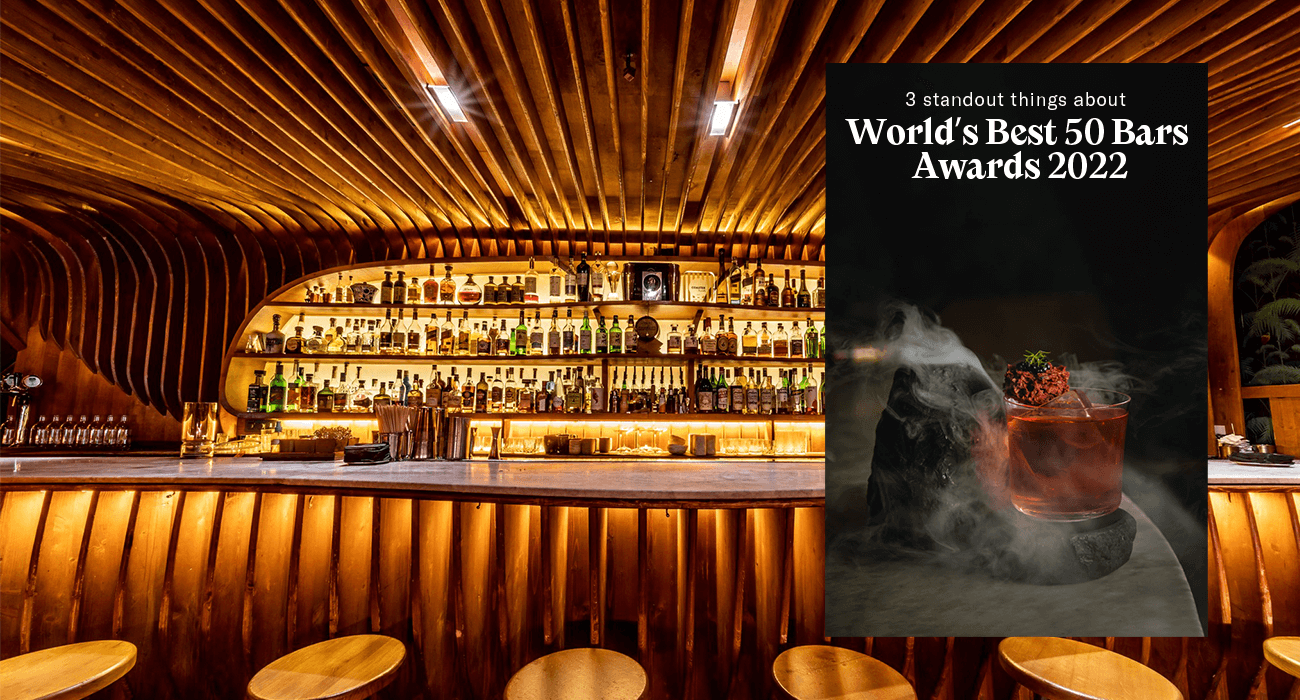 On October 4th, the bartending world held its breath for the 14th edition of the World’s Best 50 Bars awards. This not-to-be-missed annual gathering honours the hot spots around the world offering extraordinary client experiences. Each year, 650 anonymous voters (50% bartenders and 50% bar critics, professional journalists and expert aficionados) submit the names of their seven favourite establishments – which they must, obviously, have visited at least once – in order of preference. The top ranking emerges according to the bars that are most often cited.

Any ranking is, by nature, simplistic. However, year after year, the World’s 50 Best Bars awards reveal a fascinating view of the bar world and the international trends coming out of it, from emerging countries of the cocktail culture to types of establishments to cocktail concepts. Here are three remarkable finds from this 2022 edition.

For the first time in 14 years, the number-one bar on the list is neither British nor American, but Spanish! The numéro uno is the Paradiso, a bar in Barcelona that had already come up in the list in previous years (reaching number three in 2021). In 2022, Paradiso wins the holy grail, taking its place as the leader. What makes it so exceptional? A flawless performance in both technical and creative terms. This ultra-designer spot has a speakeasy-style entrance through the door of a walk-in refrigerator in the back of a deli. Its cocktails are incredibly creative and perfectly executed. This is an extremely lively area of Barcelona. The atmosphere is bustling. To get a glimpse of it without leaving your home, catch it on episode two of the fun series Foodie Love on Arté! And what appears in the third position? Barcelona again, with Sips (37th in 2021).

This list of prize-winners confirms the irresistible appeal of Barcelona, the second most-visited city in the world.

Criticized for many years as being disconnected from the ecological concerns of our times (out-of-season fruit, waste, imported products, etc.), the bar industry has made great strides since. To demonstrate this progress, a good number of the bars in the top ranking have established eco-friendly practices. Consider number five, a French bar (The Little Red Door, Paris), which has also received the eloquently named Sustainable Bar Award. And the special “One to watch” prize-winner – the Swedish bar Roda Huset, a rising star in the cocktail scene of Stockholm – opts for a radical approach. Its cocktails pay tribute to ancestral savoir-faire and preservation techniques and are exclusively prepared with locally sourced ingredients that are gathered, whenever possible, in the wild. We might also mention the presence of Re (Sydney) which takes 87th place. It is committed to the drastic approach of producing zero waste: none at all! This is a virtuous circular economic concept, since it also involves a whole community of other professionals and providers. Stronger together!

Among the 50 first establishments, five bars are located in London, making the British capital the city with the most award-winners. That’s par for the course, since England and the United States (well-represented, with four establishments in the top 50 in 2022) hold the oldest cocktail-making traditions. They came up with the term “mixology”, since mixing is the departure point of every cocktail!  While English-speaking countries have long held the top spots in the ranking and are always very strong in the conceptual and creative department, it should be said that the Asian countries occupy a certain number of spots, too, as great experts of hotel bars and the exquisitely pampered luxury client experience. With ultra-refined glassware, precise gestures, exact execution and sculpted ice cubes, the Asian cocktail arts are a school of perfection and service. Everywhere else, the world’s dynamic is playful and well-distributed, with honourable mentions for South America (six bars in the first 50 places) and Italy (four bars in all). In fact, it the Italian bar manager Augosto Peronne – head of the legendary London-based hotel bar The Connaught, which took first place the last two years before dropping to eighth this year – was awarded the very sought-after title of “Industry Icon”. A tribute to his talent and career, and a shining example of this dynamic bar industry, whose professionals travel far and often. This continual flow inspires and enriches the cocktail culture each year.

From the client point of view
“I don’t come for the drinks; I come to be looked after”

Research, molecules and hedonism: behind the scenes with Hélène Miralles, Master Syrup Maker at Maison Routin

Mindful drinking: the path to a moderation mind-set

Cutting down on waste in bars